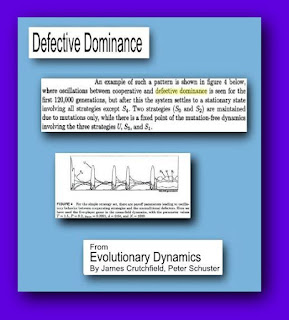 Defective dominance, a phrase I use often (but never wrote about) to describe the ugliness we see in "our" human society is "defective dominance." This is to say that, because it is easy to profit using cruelty, and difficult to prevent cruelty through kindness (or profit from generosity), cruelty, and especially cruelty-causing genes, win out in "our" synthetic world.

In the political context, psych-types would describe this defective dominance in terms of personality disorders, the most dangerous of which is malignant narcissism, what Adolf Hitler had. I assume Dawkins would agree; I believe he speaks from experience, as he, as academic oligarch, probably self-describes in his best-selling books about "selfish genes."Surprisingly to me, I found "defective dominance" to be important evolutionary and genetic term, though not necessarily widespread. (I was expecting to find more paranoid conspiracy-type stuff.)Like most genuine genetic-evolutionary material, references to defective dominance are exceedingly difficult to fathom, but very easy to observe in everyday life. By adding up all the "ugliness" that we see, and then adding to it all the "ugliness" elsewhere that we don't see (which requires multiplication), and then "factoring in growth" which means raising it to an exponential (such as "squaring" it), any of us can comprehend that we, as a Human race and a planet Earth, are in deep trouble. The result will be mega-genocidal disaster in coming decades.The question is "how will we reverse the control of the defective dominant?"The humanitarian approach is to attempt to create awareness of the problem, but I believe that effort will be ineffectual; I use the Vietnam war as an example: it was the military action by Vietnam that ended the war, not the active opposition to the war by the US population.Blocking possibilities of a popular "information-based" solutions is the academic use empiricist science--which is very much what it sounds like. Empiricism has, for 23-2500 years, focused on developing empire-building technologies for the economic growth of the aristocracy (with a short communist experiment): roads, weapons, ships, towers, medicine. Academia, for its educational effort, has been rewarded with its own "ivory" tower in it has metacognitive control over nearly every one of us for big parts of our lives as students.

Economics as a symptom of defective dominance
Most importantly, economics is not constructive nor a whole systems model. It is a connected sequence of causal conclusions designed to resemble a model.

This should be a major concern to every one of us, because it is an alternative to the system that we evolved in (or God granted us); it is a synthesis -- a fiction. The terminology and math used are complicated lies designed to show that as a market-based synthetic system it benefits all through growth. In reality, it declines financially because of inflation, erodes the meanings of our lives, and will ultimately consume all the planet's resources --as a result of uncontrolled growth.

Specific fictions within the terminology and math of economics could be, for instance, the use of retail consumption as a positive asset (or growth) when in actual business, it is a debit (or decline). House building, as a product is an asset, but in its present context it is consumption, not production, as retail is.

Production has, of course, been largely shipped to other countries, and market values --the actual measurement of a market-based economy-- are out-paced by inflation.

Economists see growth in empiricist math, but the wealthy can only grow by absorbing the resources of others and undercutting their salaries. Even the wealth of the wealthy is eroded by inflation necessitating increasing "greed" to maintain lifestyles.